The sun has been shining over Lier the last couple of days, so we have removed Hannas wollen clothes from her drawer, bought a small inflatable pool and stocked the fridge with ice-cream. Of course it’s pouring down outside today. It seems like the summer is over.

Nevertheless this is a “sunshine story”:

After our holiday in Denmark, Little H has suffered from diarrhea from time to time (if this is too much information, don’t read the rest, it gets a lot worse…) the poor little thing. Luckily I have been to work when it’s been at its worst, so Pappa Kas has suffered the consequences of a little daughter with a lot of runny poo - the hard way. Well, that is what you get on paternity leave; it is not all fun and games.

Since the weather has been so nice and little H’s bum so sore, I decided to give her sore parts some “air”. After a change, where I put on a super cute pink and green cotton dress with girls and umbrellas on it (sadly it is in the washing machine, so no photo) but left out the rest of clothing - and the diaper. Big mistake.

We went out on the veranda to watch Pappa Kas cut the grass. He is the best gardener even when it brings out his allergy he cuts and fixes the garden relentlessly. He’s the best! To see over the veranda railing I held little H on my arm and while we were standing there waiving to the super gardener I felt something warm running down my arm, and heard a splat on the veranda floor. I bet you can guess the rest.

The tummy trouble had returned and while little H waved to Pappa Kas brown yellowish stuff was running down my arm onto my trouser and on the veranda. What could I do? It would be stupid to run into the house, down the stairs and to the bathroom and put her in the shower. The whole house would be full of shit (literary). So I stood there until her face turned from bright red back into her normal Spanish glowing complexion.

I then ran downstairs to the bathroom and into the shower with our clothes on. Both little H and I was crying. After two rounds in the shower, the second one without clothes, we were ready to face the world again (read- clean the veranda- ugh), this time Little H with a diaper.

Bums will not feel the summer breeze for the foreseeable future. 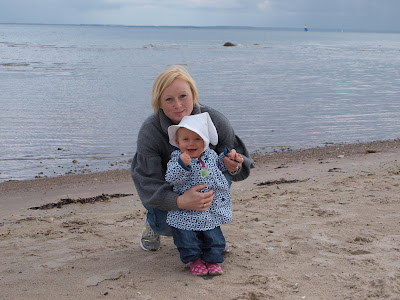