The last time we flew with little H was in December last year. She was then a little baby and behaved relatively good. Now she’s a toddler with plenty of personality, a loud voice, ants in her pants and a strong will.
I was looking forward to two weeks in sunny Spain, but rather nervous about the travel to get there. On the drive to the airport we had a little disco dancing H in the backseat. No sleeping, although it was at 5 am. The only person sleeping in that car was me.
Checking in late, rushing to the gate, no morning coffee, no magazines, but a new perfume in the duty free (Lola, Marc Jacobs) a lip-balm (Dior Addict Lip Glow) and an eye-shadow. All necessities of course.


The boarding went well, Little H found a dog to pet (!?!)(Flying to Brussels?), and all was calm and cuddly. In our seats we bribed her with grapes and yoghurt, and Pappa Kas managed to get her to sleep the last 20 minutes of our two hour flight. While awake she wandered around the isle, tried to grab an old lady’s silver pink hair, flirting with the people around, well- being H. We got no nasty looks from fellow passengers, so I concluded that the first half of our journey a successful one. 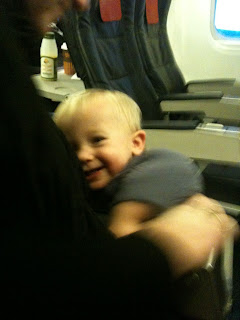 We had to run to catch the next flight, and started already then doubting whether our luggage would move as quickly as we did over to the next plane(fear confirmed btw). 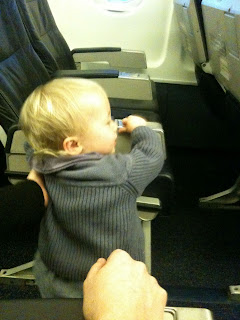 Next flight was more or less the same as the first, except that Little Miss Loud did not sleep a minute. We ate our packed lunch of omelette and fruit salad. Flying low-cost (of course) with Brussels Airlines, and no food on board, might as well, as airplane catering is not my first choice of a holiday meal. Little Miss Charming continued with her shenanigans, but with Pocoyo on the Ipad and more grapes we managed this flight pretty well as well.
Journey over. Amama Socco and Aixite Sebas waited for us at the airport and at the moment little H saw them she ran towards them with open arms. I do not know who was happier. Us having babysitters, H having someone who would spoil her for two weeks, or the grandparents who were going to do the spoiling.
Any tips for getting Little H to sit still on the journey back? 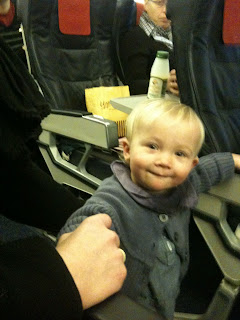