Little H loves pink, Hello Kitty, feta cheese, swings, dogs - all animals in general and especially her own goldfish.
While Little H is recovering at the hospital after an urinary infection (I will give no details), a tragedy has taken place at Casa Castro-Nyhus.

H has two goldfish in a bowl .With its pink pebbles the bowl is the centerpiece of our living room. Not nice, but what do you not do for your children? You certainly commit interior design crimes.

Pappa Kas has noticed that Malo has not been his active self over the past week or so. Yesterday he barely moved and Kas anticipated that Malo did not have long left to live. He was right. This afternoon I found him belly up in the bowl. Poor poor fishy fish.

I have been told that the most common cause of death for gold fish is overeating, but for skinny Malo it must have been something else.

I panicked a little bit and asked Kas what to do. “Easy peasy” he said. “Malo being Malo. He just escaped”.
Aha, brilliant.

So upon visiting H at the hospital we had to break the news.
Pappa Kas told her that Malo escaped during the night. This came as no surprise for Little H, she had not been at home to look after the goldfish and Malo had seen the opportunity to make a run (swim) for it.

Sad to say Malo took his last swim in our toilet and down the drains this afternoon.
RIP Malo. 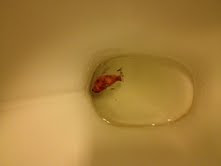